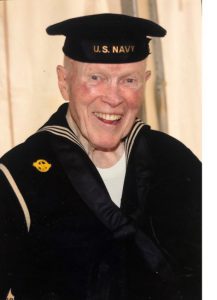 James Villars White was born in Bay City, MI July 21,1927 to Harold V. White and Janet (Anderson) White. He attended Essexville Public School grades 1 thru 9 and graduated from Bay City Central High School in Bay City, MI. He graduated from the University of Michigan with a Bachelor’s Degree in Wood Technology in 1950 where he was a member of the Delta Upsilon Fraternity. He served in the United States Navy from 1945-46. He met his future wife Joanne Ellen Christensen while attending the U of M and married her June 21,1952 in Dearborn, MI.

Jim entered the wholesale lumber business in June 1950 and owned and operated Jim White Lumber Sales until his retirement in 1982. Jim and Joanne bought a vacation home in Estes Park, CO in 1973. They moved to Estes Park permanently in 1985.

He was a member of The Rotary Club of Estes Park, Bay City Elks and America Legion. He was a Director and Officer of Estes Valley Land Trust for over 25 years helping to preserve open space in the Estes Valley for future generations to enjoy for many years.

A memorial service will be held Saturday November 9, 2019 at 2:00 p.m. at Presbyterian Community Church of the Rockies. Memorial contributions may be made to the Community Church Foundation or the Estes Valley Land Trust in care of Allnutt Funeral Service, 1302 Graves Ave., Estes Park, CO 80517. See www.allnuttestespark.com.