James Mitchell “Jim” Fischer, Jr. age 89, departed this life on December 26, 2019. He was born on February 16, 1930 in Nashville, Tennessee to the late James Mitchell and Dorcas Sybilla Fischer. In addition to his parents, he was preceded in death by his sister, Betty Blackwood. 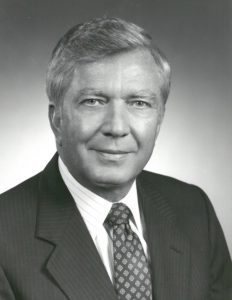 He attended Litton High School in East Nashville. After graduation, he attended Austin Peay State University, until he was drafted to serve in the United States Marine Corps. After faithfully serving his country he returned home and began a entrepreneurial career.

His diversified investments over time included, The Standard Candy Company home of the “Goo-Goo” Cluster, where he was owner and partner until divesting in 1996. He remained on the Board of Directors for several years afterwards. Jim also owned and ran 16 business schools under Fischer Educational Systems. He built the Four Corners Marina and Restaurant on Percy Priest Lake, selling it in the early 2010’s.

His indelible imprint on the Greater Nashville area, was his career as a Home Builder. Jim served the Home Builders Association of Middle Tennessee, at every level, local, state and national, he is the only member to have served as HBAMT President THREE times, managing the feat in three consecutive decades, 1975, 1984 and 1992. He is also the only local member to have served nationally when he was elected by his peers to serve as NAHB President in 1987. Over a career that spanned more than 50 years Jim built and sold thousands of homes throughout the middle Tennessee area. Inducted into the Building Industry of Tennessee’s Hall of Fame in 1994, Jim continued to serve the association well into the new millennium. In 2002 his contributions were so integral to the construction of the HBAMT’s office building that the “Wall of Fame” was officially named in his honor during the building’s ribbon cutting ceremonies.

A Celebration of Life Service will be held at one o’clock in the afternoon on Sunday, December 29, 2019 in Dignity Hall of Woodlawn-Roesch-Patton Funeral Home with Entombment to follow in Woodlawn Cross Mausoleum, with Jeff Wilson officiating. There will be a Gathering of Family and Friends from four until seven in the evening on Saturday, December 28, 2019 at Woodlawn-Roesch-Patton Funeral Home. Pallbearers, Reece Smith, III, Tom Ford,Jim Ford, Jr., Salem Emamalie, Randy Short, Jim McLean, James Carbine, Tom White and Loyd Potetee. Honorary, Jimmy Miller and John Eddie Cain. In Lieu of flowers, donations can be made to Christ Church, Old Hickory Blvd. Nashville, TN 37211.