Dana G. Fitzpatrick, 90, of Ellicottville, passed away Friday, December 18, 2020 at Olean General Hospital. He was born on March 24, 1930, in Salamanca, son of the late William F. and Loretto (Kelly) Fitzpatrick. 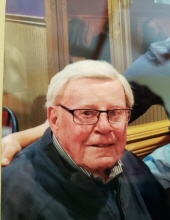 He graduated from Ellicottville Central School in 1948 where he was Senior Class President and quarterback of the undefeated 1948 ECS football team. He went on to earn his Bachelor’s Degree in Economics from the University of Notre Dame and graduated in 1952. Following college, Mr. Fitzpatrick was commissioned as an Officer in the Navy and was stationed in Newport, RI from 1952-1954. On December 28, 1955, he married the former Bernice Siebart, who survives.

He served as President, CEO, and Chairman of the Board of Fitzpatrick & Weller, Inc. capping a 66 year career by leading the company to celebrate its 125th year in 2020. Mr. Fitzpatrick was a former director of the following organizations: National Hardwood Lumber Association, Hardwood Manufacturers Association, and the American Forest and Paper Association. He served as Chairman of the American Hardwood Export Council and the National Forest Products Association. He was also past Director of the World Trade Center Buffalo-Niagara Chapter and the Cattaraugus County Bank, as well as a member of the Holiday Valley Board of Directors for 40 years.

Private family services will be held with a Celebration of Life to be announced at a later date.

Burial with military honors will be held at Holy Cross Cemetery in Ellicottville.

Memorials may be made to the Ellicottville Memorial Library or the Lounsbury Adaptive Ski Program, C/O Holiday Valley Resort, PO Box 370, Ellicottville, NY 14731.