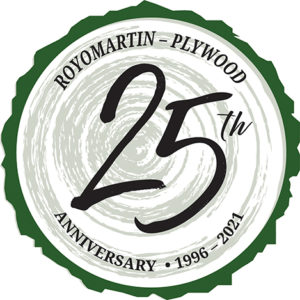 RoyOMartin’s plywood and timbers manufacturing plant in Chopin, Louisiana, marked its twenty-fifth anniversary of operations. Construction began in August 1994 on the Natchitoches Parish facility, which continues to be one of the largest of its kind in North America. Its first press-load of southern yellow pine plywood panels was produced on March 8, 1996. In the past 25 years, employment has grown from approximately 300 to more than 700, leading to a substantial economic impact on the region. The 24/7 operation manufactures a variety of SmartCore® branded plywood panels, as well as timbers, boards, and specialty products – all sold throughout the United States and, in some cases, around the world.

On Tuesday, March 23, RoyOMartin will commemorate the silver anniversary with a virtual ceremony live streamed online at https://boxcast.tv/channel/aeglzcsi8ivdvaammn3m beginning at 10:30am. This event will recognize the 35 employees who have worked for the facility since its inception. It will also feature video messages from RoyOMartin-Plywood retirees, company leaders, and board members, among others.

Regarding the anniversary, Vice President of Plywood Jeremy Burford stated, “Over the past 25 years, our Chopin plywood facility has undergone considerable growth to include multiple product lines and a timber mill. What we are most proud of, however, is our reputation in the wood-products industry for taking care of our people through world-class safety and wellness programming, unmatched employee benefits, and our self-directed advancement program. The entire plywood team continues to demonstrate its commitment to working safely, operating at top efficiency, and satisfying customers every single day.”

Martco L.L.C., known by its trade name RoyOMartin, is one of a group of vertically integrated companies owned by the Martin family focused on land, timber, and mineral resources, with special emphasis on sustainable forests and forest-product manufacturing businesses. The RoyOMartin name honors the business pioneer and Martin family patriarch, Roy O. Martin Sr., who began with a small sawmill in Alexandria, Louisiana, in 1923, and soon thereafter began acquiring timberland. For more information, visit www.royomartin.com.