As with the middle of 4Q last year, North American construction framing softwood lumber prices for the week of April 1, 2022 hit almost exactly the level of one year ago. However, last year prices were starting a major crest upward to previous impossible record-level highs. While this year they are dropping. Demand remains quite firm and inventories somewhat low at a time of year when the largest-volume producers have made their purchases for the looming spring building season, so prices do historically start dropping around this time. Reports from industry players are that continued agonizing waits for delivery are keeping true price levels as somewhat of an unknown. In Canada the long weekend for Easter is an important holiday, so there is a bit of a lull in business for that 4-day break. 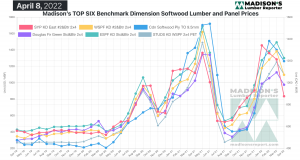 Field inventories were low across the board, but particularly among retailers. 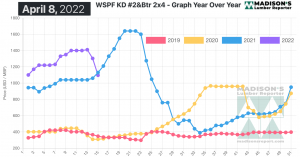 Western S-P-F producers in the United States were palpably more aggressive with their sales as prices came off in bunches with each passing day. Buyers did their best to sit on their hands, eager to see how low prices might go while they held off purchasing. Sawmill order files continued to shrink to no more than two weeks out.

While players were careful to mention how mercurial pricing was, reports of massive corrections were unanimous throughout the Canadian Western S-P-F market. Producers came to the table aggressively and with wildly varying numbers, making it hard for traders to get a solid read on overall business. Sawmills have become much more amenable to deep counters since the start of April.

“Bread and butter STUDS had a rough ride according to Canadian suppliers. The most commonly-traded trims were all down by triple digits while stud mills maintained order files two- to three-weeks out. As in dimension, Western S-P-F stud producers entertained much more significant counters than they did throughout the month of March. Downward price pressure was evident all week as buyers limited their dealings to small-volume fill-in purchases, with a focus on the distribution network.”  –  Madison’s Lumber Reporter