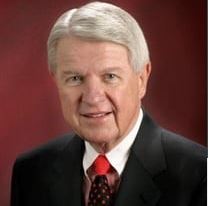 He was a longtime resident of Joplin and Carthage. He was the son of Harry Mack Cornell, Sr., and Marjorie Leggett Cornell, who was born October 5, 1928, in Palembang, Sumatra, Dutch East Indies, where his father worked drilling oil wells for Standard Oil. The family returned to Carthage, Missouri in 1932. He graduated from Carthage High School and then graduated from the University of Missouri (MU) School of Business, Columbia, Missouri in 1950. At MU, he was honored to be a member of the Beta Theta Pi fraternity.

Leggett & Platt, Inc. was always a part of his life. The grandson of a founder of Leggett & Platt, J.P Leggett, he spent high school summers unloading rail cars, and in 1950 after college, he joined the company as a traveling salesman and then plant manager. Eventually, he rose through the ranks to become president and CEO in 1960. Harry built the small regional company of Leggett & Platt, founded in Carthage, Missouri in 1883 as a spring manufacturer, into a Fortune 500 manufacturing giant producing a diverse group of products for homes, offices, and automobiles. He achieved remarkable growth through innovation and acquisition. Over the next 52 years, he transformed Leggett & Platt from five US plants and $7 million in annual sales into a $4 billion company with 130 plants in 18 countries. Today, Leggett & Platt, a 139-year-old company is a world leader as a diversified manufacturer of engineered components and products. It has 20,300 employee-partners working in 131 manufacturing facilities in 18 countries.

Harry encouraged a spirit of partnership within Leggett and its employees. A sculptor and longtime Leggett employee, Everette Wyatt, created “Partners in Progress” in the 1990s. The larger-than-life sculpture depicts two individuals pulling together to accomplish a task and stands as a hallmark to employees and visitors at the Carthage headquarters. At the dedication, former board member and longtime friend Herbert Casteel said: “The thousands of men and women who are Leggett & Platt bring to this company a wide variety of talents and a great range of abilities. Yet throughout this company, there is a spirit of partnership, an attitude of mutual respect, and a cooperative effort toward common goals. People count at Leggett & Platt, and therein lies the secret of our success.”
His many milestones include the initial public offering of Leggett & Platt stock in 1967 and the 1979 listing on the New York Stock Exchange. In 1998, Leggett & Platt was ranked in the top 6% of 500 major corporations in the Fortune survey, “America’s Most Admired Corporations” and in 1999, it was included in the S & P 500. Karl Glassman, immediate past President and CEO, and currently Executive Chairman of the Board, had the honor of working with Harry for many years. He said, “Harry exemplifies what it is to be discontented with the status quo, demanding the highest standards from everyone, himself included. But L&P was always something more personal to Harry, as evidenced by the way he cared about each of his employees.”

In 2002, Mr. Cornell was named Chairman Emeritus of the Board and after 58 years of service, he retired in 2008. In 2016, Leggett & Platt’s Corporate headquarters in Carthage, Missouri, was renamed The Cornell Campus after Harry whose “legacy of honesty, commitment, and accountability defines the company’s culture.” To honor his role in its success, a life-size bronze sculpture of Mr. Cornell now welcomes visitors to the headquarters.

He had a strong connection to the arts and valued the role the arts play in everyday life. As the CEO at Leggett & Platt, he felt that “The Art Spirit,” was alive in him as an inventive, searching, daring, self-expressing creature. Art helped feed his imagination in his personal and professional life. He thoroughly enjoyed collecting visual works of art for over 50 years for his personal collection and the corporate Leggett & Platt Collection. He surrounded himself with paintings and sculptures in his home and at work – appreciating and enjoying art daily. One of his biggest joys was meeting the artists and having a relationship with them.

Another lifelong enjoyment was enjoying nature and traveling. Being born in Palembang, Sumatra, and living there with his parents until he was five years old, he was exposed to the Indonesian landscape, wild animals, and their way of life. This “wildness” remained a part of him throughout his life. Over many years, he traveled the world to observe wildlife in its natural habitat and enjoyed being a part of nature. He made many lifelong friends during his travels and amassed a collection of African and North American wildlife and art that is exemplary and surpasses that of many natural history/science museums in the US.

Harry was a visionary CEO who considered each achievement to be a team effort, encouraging others to strive for excellence and to focus on continual improvement. He continued to fulfill that drive through his philanthropic commitments. At the University of Missouri (MU), his alma mater, he was instrumental in the development of a new home for the business school, dedicated as Cornell Hall in 2002. In 2003, the university awarded him an Honorary Doctor of Law. Cornell conceptualized and funded the highly selective Cornell Leadership Program at the University of Missouri.

In most recent years, he has provided the Joplin region with a tremendous level of generosity. He committed major gifts to the Harry M. Cornell Arts & Entertainment Complex, a state-of-the-art visual and performing arts center in downtown Joplin which will be home to Connect2Culture and Spiva Center for the Arts, to be completed in late 2022; the Cornell-Beshore Cancer Institute at Freeman Health System; to the Harry M. Cornell Medical Education Center at Kansas City University of Medicine and Biosciences, Joplin campus; and to the Harry M. Cornell Dental Education Center, Kansas City University College of Dental Medicine, currently under construction, Joplin campus.

Harry has received numerous awards. Recently on April 28, 2022, he received the Joplin Citizen of the Year Award from the Joplin Area Chamber of Commerce. In 2020, he was honored as a recipient of the University of Missouri Alumnae 2020 Golden Quill Award, one of the highest honors for a MU Graduate. In 2019, Harry was selected as one of 33 business school graduates honored by AACSB International as the 2019 Class of Influential Leaders, an annual challenge that recognizes notable alumni whose inspiring work serves as a model for the next generation of business leaders. In 2018, he received the Furniture Today Lifetime in Bedding Achievement Award, and he was also inducted into the Hall of Carthage Heroes, Carthage, MO. In 2014, he was inducted into the American Furniture Hall of Fame as an Industry Fellow. He was named Carthage’s Citizen of the Year in 1998, where Leggett & Platt was founded, and its headquarters is located.

In his personal life, Harry was an involved and supportive father, grandfather, and great-grandfather and he is remembered with love by each of them. He is survived by his two daughters, Sharon Beshore and her husband Lance, Joplin, Missouri, and Cynthia Cornell, Corte Madera, California, from his first marriage to Shirley Frerer Cornell; a step-son, Mark Williams and wife Stephanie, Carthage, Missouri; two grandsons, Brent Beshore and wife Erica, Columbia, Missouri, and Blake Beshore and wife Teresa, Springfield, Missouri; and three step-grandchildren, Grant Williams, Lexie Eckert, Conner Yust and wife Catherine, Carthage, Missouri, and seven Beshore great-grandchildren, Hattie, Audrey, Blaise, Beaux, Baird, Claire, and Emma. Additional survivors include Pam and Mike Robertson, Joplin, Missouri; Ted and Debra Evans, Jr., The Villages, Florida; and Kathie Hart, Grove, Oklahoma. The family thanks Lonnie Grebe for his years of dedicated service and appreciates the services Home Instead provided during the last two years.

A visitation and funeral service are planned for Saturday, May 14, 2022 at Grace Episcopal Church in Carthage, Missouri.

Visitation will occur at Grace Church Parish Hall from 12:00 p.m. to 1:30 p.m. A funeral service will be held in the Church at 2:00 p.m. It will be followed by a Private Family Interment at Park Cemeter.

Arrangements are under the direction of the Ulmer Funeral Home. Online condolences maybe sent at www.ulmerfh.com