John’s wish was that we let all his customers, sales people, co-workers and partners at the lumber company that he really missed them when he retired from Shuel’s Lumber. 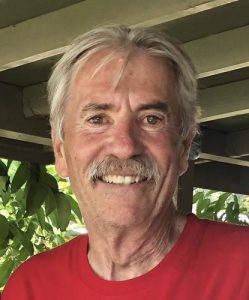 Thank you… Bob Velasquez, for calling John. He talked and laughed about your call all day.

John was in lumber sales for most of his working life. Started at Cashway Lumber and then on to Shuel’s Lumber in 1989. Then in 2009 Bill Shuel decided to retire and sold the company to his three faithful employees, John, Bob Velasquez and Dayna Shuel, Bill’s daughter. John helped run the company until his retirement in 2018.

He and Kathy, his significant other, decided to sell their home in Yakima and retire to their little 840 square foot cabin on the Wenatchee River in Cashmere, Washington. John loved the river and had a morning spot at the table where he could watch the wild life and read his car magazines.

We know that his mom and dad, John O’Brien Dell and June Lois Klar Dell, grandparents Rudy and Pearl Kurcher Klar were waiting with open arms as he finished his journey here on earth.

He was diagnosed with a rare autoimmune disease called MSA-C about a month or so after he retired. Took it like a trooper and tackled it head on. Never took a moment for granted and shared great times with family. He fell asleep Saturday, May 7, and gently slipped into eternity later that day.

Kimberly Anne Dell, his only daughter and grandchildren were frequent visitors from their home in Nelson, BC. They brought so much joy and laughter to his life. Kim loved helping and entertaining her dad. In 1993 Kim decided her dad needed to get out more so she introduced him to Kathy. That blind date lasted for 29 years. She and her husband, Travis Yost, loaded him up in their 4Runner vehicle and took him 6,000 feet up Chumstick Mountain… big WOW for him. Kim’s two children: Sophia and Ronan Lewis loved their JohnJohn and will miss him very much.

His only brother Kevin and Kevin’s wife Sharon Baladez Dell live in Moxee. Their party room has seen some great late nights with jokes and laughing until one’s sides hurt. The love and support they gave John meant so much. Kevin and Sharon’s boys: Joe and wife Suzy, living in Atlanta, GA. with their daughter Samantha and Casey and wife Carly, living in Lake Stevens with their son Cayden cared deeply for their Uncle Johnnie and his unforgettable infectious laugh!!

John was born February 12, 1952 in Yakima, Washington. John is known for his honesty, fairness, goodness and kindness. He knew the joys of growing up in a tight knit family. The yearly trips to Long Beach Washington with the family, and a few dogs over the years, crammed into the pickup pulling grandpa’s trailer…what memories. He loved and cared for his partner Kathy with all the love a man could possibly give a woman.

We all miss him tremendously!

Please join us Saturday, June 18, for a Celebration of Life for John at Kevin and Sharon Dell’s home: 4228 Thorp Rd., Moxee, Washington. Begins at 1:00 pm.

Hey Babe, can’t wait until we can wrap our arms around each other again, my sweetheart, my lover, my world.