Ronald (“Ron”) Truman Fallert passed away on Monday, April 8, 2019, in Portland, Oregon, with his daughter Kelly and wife Susan at his side. He died as the result of a sudden-onset brain tumor (glioblastoma). 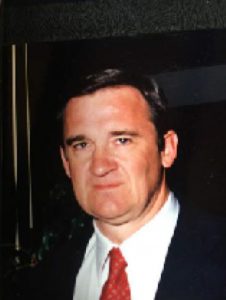 Ron was born on September 6, 1941 in North Bend, Oregon, to Claremont (“Bill”) Fallert and Marianne Spees Fallert. The family lived in Scottsburg, Oregon until Ron was 9 years old, at which time they moved to Brookings, Oregon. There the Fallert family and business partners bought a small sawmill and formed a company. Later the Fallert family took on full ownership of the company. Ron graduated from Brookings High School, where he played football and made many lifelong friends. He attended what is now Southern Oregon University, graduating in 1965 with a B.S. in Business. He took a management position at International Paper before returning to the family business, now known as South Coast Lumber Company, in 1973. He began as general manager and soon became president and CEO.

Ron was known for his uncanny sense of timing in making business decisions, as he developed the family company into one of Oregon’s largest privately owned timber companies, with international ties. During its growth, major developments included the acquisition of Agnew holdings and Brookings Plywood and the construction of an LVL plant and a new state-of-the art sawmill.

Ron was known for his quick wit and sometimes sharp humor. He had a nickname for everyone of significance in his life. He loved hunting and fishing with his brother, Larry, and his friends. He and his wife of 33 years, Susan, traveled extensively. He had enormous pride in South Coast Lumber Company and all of the people who worked there. In the evenings at home, he enjoyed relaying stories about his time with employees at the company, especially those doing the hard physical work of day-to-day operations.

When not working, Ron often spent time at his ranch, where he enjoyed clearing the land with his CAT and caring for the trees. He took great pride in its park-like appearance.

Ron was a long-suffering Kansas City Chiefs football fan, and he loved to watch football with his wife Susan by his side, enjoying the wonderful meals that she prepared. He also loved animals, especially his dog Minnie, a Rottweiler who accompanied him every day to work and almost everywhere else he went.

Ron took great pride in his family, including his only grandchild, Ellie, who brought him some of his most joyful moments in his last days.

Ron Fallert, the boss, friend, brother, uncle, grandfather, father and husband, will be enormously missed by those who love him so much.