“Credit supply increased 2 percent in April and was driven by a 7 percent gain in the jumbo index, which reached its highest level since the beginning of the MCAI in 2011,” said Joel Kan, MBA’s Associate Vice President of Economic and Industry Forecasting. “Additionally, investors continued a trend from March of further increasing their willingness to purchase more non-QM and non-agency jumbo loans. The high-end of the purchase market had shown weakness earlier this year, before the recent decline in mortgage rates, and it appears investors are trying to remain competitive in that segment of the market.” 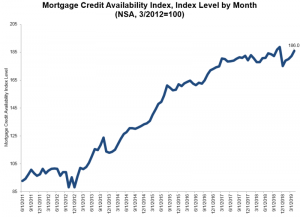 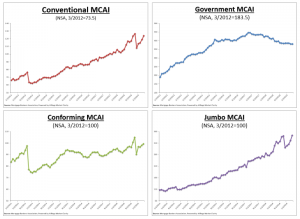 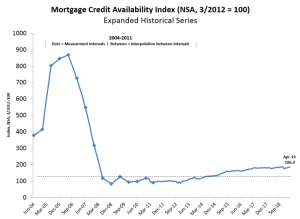 ABOUT THE MORTGAGE CREDIT AVAILABILITY INDEX

The MCAI provides the only standardized quantitative index that is solely focused on mortgage credit.

The MCAI is calculated using several factors related to borrower eligibility (credit score, loan type, loan-to-value ratio, etc.). These metrics and underwriting criteria for over 95 lenders/investors are combined by MBA using data made available via the AllRegs® Market Clarity® product and a proprietary formula derived by MBA to calculate the MCAI, a summary measure which indicates the availability of mortgage credit at a point in time.  Base period and values for total index is March 31, 2012=100; Conventional March 31, 2012=73.5; Government March 31, 2012=183.5.

MBA updated its methodology in August 2016 which produced an updated set of index values (historically and moving forward), for more information on this updated methodology please visit www.mba.org/MortgageCredit and read the FAQ and Methodology documents. Any historical data obtained prior to August 2016 is not comparable to the current, revised index and should be replaced with the new history.