84 Lumber has announced John Hay as its new divisional vice president (“DVP”) of the Mid-Atlantic region, effective immediately. Hay has been with the building materials supplier since May 1989 and has held several roles over the past 30 years, first as a manager trainee at the former Murrysville, Pa., location and most recently as the manager of the Bridgeville, Pa., store. Under Hay’s direction, the Bridgeville location has achieved the highest sales and profit in 84 Lumber’s Central division over the past five years, including $34.9 million in total revenue in 2018. Hay has also been lauded for his humility and outstanding leadership qualities, all of which helped him secure his new position. 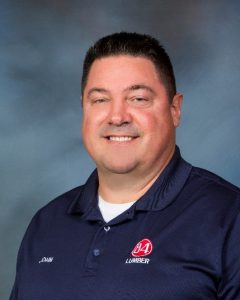 “John has an impressive history of developing and promoting people to positions outside of his store,” said Maggie Hardy Knox, president of 84 Lumber. “His leadership characteristics have been brought to my attention over the last year or so as he’s had the opportunity to address co-managers at our Leadership Camp, as well as new store managers at Manager Camp. His passion for coaching the future leaders of 84 helped solidify the decision to promote him into this role.”

As the Mid-Atlantic DVP, Hay is responsible for increasing sales and probability throughout his region, as well as overseeing operations and staffing for 70-plus locations. He’s also been tasked with helping the division reach $1 billion in annual profitable sales within the next three years. His first step, however, is simply to get to know his new associates.

“My immediate goal is to familiarize myself with everyone and their roles,” Hay said. “I want each store to have a friendly, family-like atmosphere where all associates — whether they’ve been with us for years or just started here — can thrive.”

Hay recently moved to Bel Air, Md., with his wife Christine to be more centrally located for his new role.

“It has been a career-long dream of mine to one day be in this position,” he said. “I’m thrilled to have an opportunity to work with some of the best people at 84 and in our industry. We have some lofty goals ahead, but I can’t wait to roll up my sleeves and help my team achieve them.”