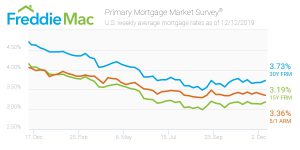 “With Federal Reserve policy on cruise control and the economy continuing to grow at a steady pace, mortgage rates have stabilized as the market searches for direction,” said Sam Khater, Freddie Mac’s Chief Economist. “The risk of an economic downturn has receded and, combined with the very strong job market, it should lead to a slightly higher rate environment.”

Khater continued, “Since early September, when mortgage rates posted the year low of 3.49 percent, rates have moved up to 3.73 percent this week. Often, while higher mortgage rates are deleterious, improved economic sentiment is the reason that these higher rates have not impacted mortgage demand so far.”

– 5-year Treasury-indexed hybrid adjustable-rate mortgage (“ARM”) averaged 3.36 percent with an average 0.4 point, down from last week when it averaged 3.39 percent. A year ago at this time, the 5-year ARM averaged 4.04 percent.

Average commitment rates should be reported along with average fees and points to reflect the total upfront cost of obtaining the mortgage. Visit the following link for the Definitions. Borrowers may still pay closing costs which are not included in the survey.