On Saturday, July 25, the founder and earliest visionary of VT Industries, Inc., Roger Clausen, passed away. Roger passed away peacefully after a short illness. 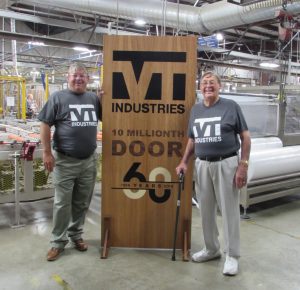 Roger Clausen was born in 1927 on a farm outside of Holstein, Iowa. His life on the farm, in rural northwest Iowa, shaped him throughout his youth and instilled a strong work ethic and sense of pride for his country. After graduating high school, Roger enlisted in the Navy and then went on to graduate from the University of Denver.

After college, Roger returned home to Holstein, and married the love of his life, Rosemary in 1952. Later, in 1956, Roger founded Van Top, which would eventually become VT Industries. Van Top started with two employees in a rented chicken coop and specialized in manufacturing furniture and laminate countertops. It was Roger’s early vision that shaped the business and the postformed laminate countertop industry as we know it today and in 2005, he was inducted into the Kitchen and Bath Industry Hall of Fame.

In the early 1960’s Roger diversified the business by adding laminate doors to the product offering. Today, VT Industries is the industry leading manufacturer of commercial and residential architectural wood doors, a fact that made Roger very proud. He often said that never in his wildest dreams did he think the company would grow into what it is today.

Roger was more than just an accomplished entrepreneur and businessman, he was also a well-respected, hardworking leader at Van Top and within the community. Roger and Rosemary’s philanthropic spirit supported Holstein and northwest Iowa causes, large and small, and include the Rosemary Clausen Performing Arts Center, Briar Cliff University, and other endeavors close to their hearts.

It has been said that Roger didn’t know a stranger and his kind smile and outgoing personality helped him create long-term friendships and business relationships. Roger took a personal interest in each of his employees. Even after his retirement in 1989, he would often be found catching up with the employees on the production floor and throughout the office.

Roger was also a lifelong learner and learned how to fly early in his career. His love of flight and business intersected as he would often travel by air for sales calls in his Piper Comanche airplane, helping grow the business beyond the Midwest.

Greater than the sum of all his business achievements and accolades was his love for his family. He leaves his family with an amazing legacy of love and kinship that is present in his children, grandchildren, and great grandchildren. He will forever be cherished in their memories made as a family from fishing in Canada to the boat rides in Okoboji, and countless more.

“We are mourning the loss of our father, the founder of our company, dear friend, and mentor to many. My words are not adequate to describe the immeasurable impact he had on our family and the values he instilled in us. Our loss is great, but his legacy is greater. We mourn his passing but will continue to live and work in a way that honors him,” says Doug Clausen, Roger Clausen’s son and Chairman and CEO, VT Industries, Inc.

Roger Clausen will be missed and fondly remembered by his family and by VT Industries employees and colleagues throughout the United States.