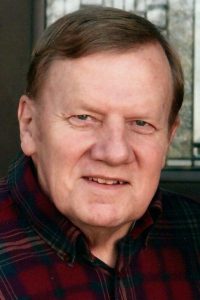 He is survived by two daughters and sons-in-law; Erin and Nic Baker of Bloomington, IL and Erica and Eric Gillhouse of Chesterton, IN. One son and daughter-in-law, Alex and Carolina Ford of Bourbonnais, IL. Twelve grandchildren; Leyton, Logan, Regan, Nolan, Ryan, Madden, Emerson and Maren Baker, and Austen, Allyson, Owen and Olivia Gillhouse. One sister; Susan Cowan of Galesburg, IL. Also surviving are three brothers-in-law and two sisters-in-law; David and Roxann Grzetich of Crest Hill, IL, John Grzetich of Honolulu, HI, and Daniel and Dawn Grzetich of Crest Hill, IL. He is preceded in death by his parents and one brother, Donald Ford.

He was retired from the Edmund Allen Lumber Company in Momence, IL where he had served as CEO and a local farmer. Kenneth served in the United States Army and was stationed in Alaska during the Vietnam War.

He was a member of the Illinois, Michigan, Wisconsin and Indiana Lumber Dealers Association, the North American Wholesale Lumber Association, the Momence Chamber of Commerce, and founding member of the Kasler Memorial Veterans Park. For many years, he worked on the Gladiolus Festival parade floats and sold tickets at the carnival gate. Ken had also served on various other local boards and committees over the years. He enjoyed fishing, golfing, bowling, reading and remodeling. Kenneth also loved playing cards and games with his family and friends.

Cremation rites have been accorded and a private memorial service will be held. A memorial visitation will be held from 2:00PM – 6:00PM on Sunday, August 9, 2020, at the Cotter Funeral Home, in Momence, IL.