Georgia–Pacific announced that it is building a state-of-the-art gypsum wallboard production facility near Sweetwater, Texas. The new $285 million plant will be GP’s second gypsum wallboard facility in Nolan County. The new facility will be located adjacent to GP’s existing gypsum plant, on Highway1856, off Interstate 20, and will incorporate state-of-the-art production processes. The two operations combined will be capable of supplying customers and distribution partners with more than 1 billion square feet of gypsum products each year. 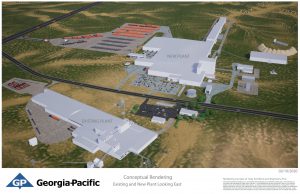 “The demand for our diverse gypsum products continues to be strong, especially in Texas,”says Brent Paugh, president, Georgia-Pacific Gypsum. “By having two production lines in Nolan County, Georgia-Pacific can strengthen its capacity to meet our growing customer needs in Texas’ residential, commercial and industrial construction.”

Currently, GP is preparing the site to build the technologically advanced plant, and construction on the new facility will begin immediately with startup expected in late 2022. Once it is operational, the new plant will employ approximately 120 full-time employees. With additional planned investments in its gypsum portfolio, along with the new Nolan County project, the company anticipates retiring its Quanah,Texas, facility in the next few years depending upon future market conditions.

According to Paugh, Nolan County was chosen for the new project due to its proximity to gypsum customers. “In Sweetwater, we will be able to keep logistical costs low, and we will have access to more trucks to deliver our products. This, along with the company’s current gypsum facility near Sweetwater, a talented workforce and local natural resources, makes Nolan County an ideal site to expand our operations,” says Paugh.

“We are excited that Georgia-Pacific has chosen Nolan County for its new gypsum wallboard plant. This expansion illustrates the company’s ongoing support to the area and the state of Texas,” says Whitley May, Nolan County Judge. “Georgia-Pacific’s new investment in Nolan County will stimulate our local economy by creating better, high tech jobs directly and indirectly and by contributing to the overall viability of our city and county.”

In addition to the city, county and economic development leaders, State Senator Charles Perry was instrumental in bringing the new plant to Nolan County, “We are extremely proud that Georgia-Pacific continues to have confidence in the state of Texas and Nolan County,” says Perry. “Georgia-Pacific’s decision to build a 285-million-dollar plant in West Texas demonstrates its ongoing dedication to creating good jobs and new opportunities for the people of Texas. This once again proves that Texas’ responsible regulatory environment and low taxes will keep Texas a leader in job creation for years to come.”

The current GP gypsum wallboard plant has called Nolan County home since 1957. GP has invested more than $6 million in technological upgrades and capital investment this year. The existing Sweetwater facility employs 115 people with an annual payroll of approximately $9.9 million and is one of 12 GP manufacturing facilities in Texas.