The MCAI fell by 1.9 percent to 118.6 in September. A decline in the MCAI indicates that lending standards are tightening, while increases in the index are indicative of loosening credit. The index was benchmarked to 100 in March 2012. The Conventional MCAI decreased 6.1 percent, while the Government MCAI increased by 1.4 percent. Of the component indices of the Conventional MCAI, the Jumbo MCAI decreased by 2.1 percent, and the Conforming MCAI fell by 9.5 percent.

“Mortgage credit supply decreased in September to its lowest level since February 2014, driven in part by a 9.5 percent decline in the conforming loan segment. This reduction was the result of lenders discontinuing conforming ARM loan offerings in advance of the September 30, 2020, application deadline for GSE-eligible, LIBOR-indexed ARM loans,” said Joel Kan, MBA’s Associate Vice President of Economic and Industry Forecasting. “Across all loan types, there continues to be fewer low credit score and high-LTV loan programs. The housing market overall is on strong footing, but the data show that lenders are being cautious, given the spike in mortgage delinquency rates in the second quarter, as well as the ongoing economic uncertainty.” 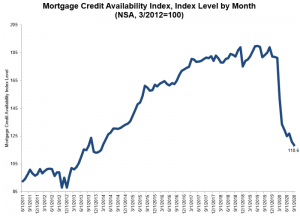 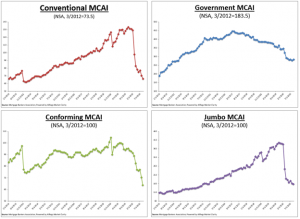 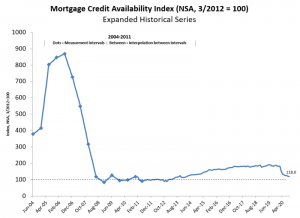 Data prior to 3/31/2011 was generated using less frequent and less complete data measured at 6-month intervals interpolated in the months between for charting purposes.

About the Mortgage Credit Availability Index

The MCAI provides the only standardized quantitative index that is solely focused on mortgage credit. The MCAI is calculated using several factors related to borrower eligibility (credit score, loan type, loan-to-value ratio, etc.). These metrics and underwriting criteria for over 95 lenders/investors are combined by MBA using data made available via the AllRegs® Market Clarity® product and a proprietary formula derived by MBA to calculate the MCAI, a summary measure which indicates the availability of mortgage credit at a point in time. Base period and values for total index is March 31, 2012=100; Conventional March 31, 2012=73.5; Government March 31, 2012=183.5.

The MBA updated its methodology in August 2016 which produced an updated set of index values (historically and moving forward), for more information on this updated methodology please visit www.mba.org/MortgageCredit and read the FAQ and Methodology documents. Any historical data obtained prior to August 2016 is not comparable to the current, revised index and should be replaced with the new history.