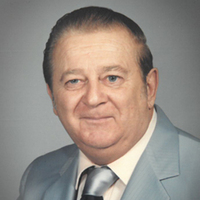 He lived life to the fullest! “He did it his way!”

On Sunday evening, October 25, 2020, a truly Great Man Gerald Eugene Ort Sr. 85 of Clintonville, Wisconsin was called to his heavenly home. He will be fondly missed by all. Gerald was not one to let any grass grow under his feet, which is why he passed on Sunday! (Not a work day)

Gerald is survived by his wife Carol; four sons: Gary, Thomas, Scott and Gerald Jr. (a son Mike who is warmly welcoming him through the Pearly Gates), two daughters, Lorie (Tom) Colla and Tammy (Corey) Higgins. Gary (Elmira) has four daughters: Kathy Jo, Kari Jo, Bobbi Jo and Billi Jo; Gary has ten grandchildren and two great-grandchildren. Thomas (Deanne) has four children: Erica, Tommy, Matt and Drew. Scott (Paula) has four sons Michael, Tanner, Morgan, and Ashton. Gerald Jr. (Christina) has two children, Natalia Tulip and Harding Gerald. Mike has one daughter, Shannon and one granddaughter Isabella. Lorie (Tom) has three children: Tyler, Jarrett and Josie. Tammy (Corey) has four children: Riley, Caedyn, Alyssa and Halley. There were seven children in Gerald’s immediate family growing up, but only one survivor, a sister Karen Horsley, of Arizona whom Gerald not only thought of as a little sister but a “True Blessing.”

Gerald was raised on a dairy farm in Ellington, Wisconsin. He started helping on the farm at a young age. When he was five years old he milked five cows by hand. And every year he got older, one more was added to his chores. Eventually he was lent out to relatives to work on their farms. In the early 50’s he started driving truck, selling Christmas trees in Milwaukee and Chicago, and hauling hay, logs, and lumber. He added a portable sawmill in 1954. He had a couple employees and they cut and sold to mills in Shawano. By 1968, he bought a farm and built his first mill on the Drier Road Property in New London. That mill was rebuilt in 1972 and a larger mill was built in 1976. He was united in marriage to Shirley Waffle in 1956. They were blessed with four sons. After Shirley died he married Carol Morack in 1976. He was then blessed with three more children and added a few more businesses to his legacy. Throughout the years all of his children have helped to make his businesses a success.

April 1991, life would take him in a different direction when he purchased Silver Spur Campgrounds and turned it into the beautiful Captain’s Cove Resort as we know it today.

As lumber is in his blood; he went on to start Wittenberg Hardwoods, Polar Hardwoods, Aacer Flooring, and a few others along the way. In June 1998, he purchased his longtime dream… Tigerton Lumber Company. The Good Lord has blessed him and helped him to provide employment for many people throughout the years.

A Celebration of sharing his Legacy and honoring his life will be held at St. Martin Lutheran Church, Clintonville, Wisconsin on Saturday, October 31, 2020 at 3:00 PM with Rev. Chris Berg officiating. Visitation will be held at the church on Saturday from 12:00 pm until 3:00 pm. Cline & Hanson Funeral Home, New London is assisting the family.

A special thank you to the staff at St. Elizabeth Hospital for all the wonderful care they provided.