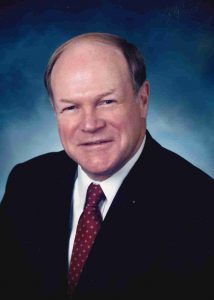 Graveside service will be Friday, November 20, 2020, 11:00 A.M. at Forest Lawn Cemetery in Ruston, LA. Rev. Brian Mercer will officiate under the direction of Kilpatrick Funeral Home of Ruston.

Alex attended Ruston High School where he was a leader on the Bearcat football team and went on to graduate from Georgia Tech where he played football on the 1951 national championship football team in the Sugar Bowl. After college Alex married Laura James in 1953 and then went on to serve in the Army during the Korean War. Alex returned to Ruston to work for the family business, Hunt Lumber Company, which merged with Williamette in 1972. He started what is now known as Hunt Forest Products in 1977 and grew the company into a regional wood products supplier.

Alex and Laura had two sons, Alexander Trotter Hunt, III, and James Davis Hunt. Laura Hunt passed away in 1992. He later married Sallie Shafto who died in 2008. In 2009 Alex married Willie Heard Sherrouse. He was preceded in death by his brothers Davis Hunt and Tommy Hunt. Alex is survived by his wife, Willie, his two sons, Trott and his wife, Karen, and Jimmy and his wife Ann.

He is survived by ten grandchildren:

Alex was a member of the First Presbyterian Church in Ruston serving as a former elder as well as a former board member at Lincoln General Hospital and First National Bank of Ruston. He was an avid outdoorsman and enjoyed hunting, fishing and playing golf. Alex always maintained a passion for Georgia Tech football and supported his alma mater his entire life. Honorary pallbearers are grandsons.

Online condolences may be sent to the family at www.kilpatrickfuneralhomes.com.