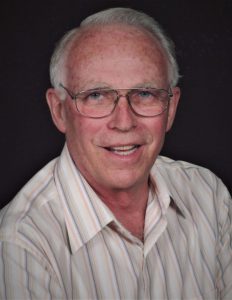 He was the second child of Harold Herman Frick and Virginia Mae (Savoie). They both preceded him in death.

Ford graduated from Rome City High School in 1958 and attended the National Hardwood Lumber Association (“NHLA”) Inspectors School in Memphis, Tenn. After graduation, he returned to the Brimfield area and began working at Frick Lumber Company, Inc., becoming the lumber grader and working side by side with Harold, his father. He became the president years later and continued to serve in that position.

He married Brenda Frazier Sutton on June 13, 1959. They have two sons, Ford A. Jr. and Holly (Lash) and Christopher Benton and Teresa (Nesbitt).

He attended Merriam Christian Chapel, sang in the choir, was director of AWANA Pals, and was a member of Gideons International and Brimfield Lions Club.

Ford was a lover of the Lord, servant to the church and a diehard Cubs fan. He enjoyed spending time with his family and friends, was never far from the love of his life “Ben,” and their latest dog, Woody. He enjoyed annual travel excursions with his siblings, family reunions and gatherings for holidays and birthday parties, and several years of Lake Cumberland boat trips with special friends.

He worked at the family-owned Frick Lumber for 61 years alongside his dad, wife, son, son-in-law, sister, brother-in-law, granddaughter, grandsons and great-grandsons. He was fiercely devoted to every employee and treated them like members of his extended family. In his younger days, he spent the summers coaching little league teams for his sons and many aspiring baseball stars. No destination was too far when attending a Chicago Cubs game with Brenda, Ford Jr. and Chris. He enjoyed watching all his grandchildren play games, sing, dance and play instruments. He was a talker and truly never met a stranger.

Visitation and funeral services will be held at Merriam Christian Chapel in Merriam, Indiana. Visitation hours are Monday (November 23rd) from 3-7 p.m. and Tuesday at 10 a.m.

Funeral services will be held Tuesday at 11 a.m. with Pastor John French officiating. Those unable to attend may view the service virtually via live stream at https://www.youtube.com/channel/UC_thKo9gKDCTLWpu3p44lXg.

Graveside services and burial will be at Orange Cemetery in Rome City.