Theodore A. Smith (“Ted”), our Dad, regretfully, passed away peacefully on November 16,2020 at the age of 88. He had spent the last 10 months in Ridgeview Lodge, and previously in Berwick on the Park, Kamloops. A special thank you to the team in both homes for your care and support. 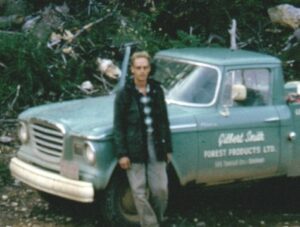 Dad was very proud to say he was born March 31,1932 in Blue River, B.C. From there his family moved to Vernon for a short time, before making Kamloops their home in the early 1940’s. Dad was a Graduate of first year university from Kamloops Senior Secondary, then attended UBC for six months. He then moved back to the North Thompson Valley to continue his work in the cedar pole/piling business with his father. He and his Dad formed the corporation Gilbert Smith Forest Products Ltd. in 1955. After his Father ‘s retirement in 1957, he continued his position as President of Gilbert Smith Forest Products. They built the first lumber mill in 1968. Dad remained President until 2016. Dad had a very high regard for the “boys”. He always said if it wasn’t for the men, there wouldn’t be a mill. That included the much needed “girls” as well! Dad was well respected by his peers, often referred to as a “Pioneer of the Forest Industry”. Dad sat on numerous boards, and associations, all of which enhanced his interest in the industry. One in particular, Fibrico. He would often reminisce about standing around the bon fire at the North Vancouver site. He served as the Chairman and director for several years for Fibrico. Dad was also a strong advocate of Barriere. In the fire of 2003, Dad’s focus was not on saving his father’s legacy, but saving the jobs that supported Barriere. He also served on the TNRD as well as the Barriere Improvement district.

Dad will always be remembered as a straight shooter, in his work and home. You knew where you stood with him! He also had a fun loving side. That was brought out many times on a Sunday at the cabin, on Adams lake, or as Dad would say “God’s Country”. He was an avid water and snow skier, always with a grin, and enjoyed sharing those times with the ones he loved. His 75th Birthday with family and friends at Sun Peaks was a fond memory for him. Dad and Mom also had their “spot” in Maui that they enjoyed annually for several decades.

Dad met his beloved wife in the outdoor club and was married to Mom (Dorothy Margaret) for almost 59 years before her passing in 2014. He is also predeceased by his father, George Gilbert Smith in 1976, and his mother, Carmen Jessie Smith in 1986, brother Harry and niece Heather.

Due to Covid, there will be no formal celebration of life. In lieu of flowers, memorial donations may be given to the Terry Fox Foundation, 150-8960 University High St., Burnaby, B.C. V5A 4Y6. A charity near and dear to Dad. He was all smiles while riding in the horse wagon at the Terry Fox Run in Barriere.