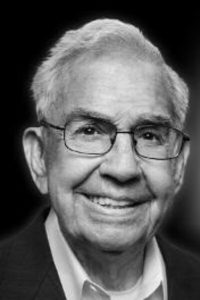 J.W. was born on July 22, 1918 to Sulphur natives, Andrew and Elma Stine in Victoria, Texas in difficult times, just before the end of the Great War, World War I, and during the worldwide Spanish flu pandemic. J.W.’s father died, when J.W. was only 11 years old, in an automobile accident in Oklahoma leaving his mother to raise four pre-teenaged children alone. His formative years included the Great Depression, the Dust Bowl, and finished with World War II. Behind this backdrop, he, like all of those from the “Greatest Generation”, was grateful and appreciative of all that came later.

J.W. attended Sulphur High where he excelled in boxing and as quarterback of the football team. He married his high school sweetheart, the love of his life, Doris “Dee Dee” Drost in 1944, and they spent a wonderful 67 years together until her passing in 2011.

He served in World War II in the U.S. Army Air Corps and flew over 40 missions as a B-26 bomber pilot, obtaining the rank of Captain. Returning home from the war, he and his high school best friend and fellow bomber pilot, J.C. Carlin, started Starlin Construction which later became Starlin Lumber. In 1952, J.W. and J.C. parted ways amicably. The name was eventually changed to Stine Lumber in 1973. Today, the company has 11 stores and over 800 associates.

He and Dee Dee were blessed with seven children, six sons and one daughter. In raising his family, he led by way of example. He possessed an easygoing manner and a calming spirit. He gave all who knew him a sense of wonder, excitement, and encouragement. He could make you laugh with just a flinch of his face or a witty comment. He pulled people into his orbit by showing love, respect, and devotion. His ability to draw others around him was reflected in his six sons joining him in the family business. His loving daughter became an accomplished sculptress.

He was a devoted member of Our Lady of Prompt Succor Catholic Church and the Knights of Columbus Council 3015. He was named by the Knights of Southwest Louisiana “Citizen of the Year” for the Catholic Diocese of Lake Charles in 1989. He was a proud member of the VFW Post 8107 and American Legion Post 179.

Throughout his life, J.W., along with his wife Dee Dee, gave back to their community they so loved, making numerous donations to youth, educational, ecumenical, and other charitable organizations.

His long life was a blessing to him and all of those who came to know him, love him, and now share in his legacy. The entire Stine family will forever be grateful for J.W.’s life and love, for the compassion of those who have taken care of and prayed for Dad, and for the condolences of our friends and neighbors.

In lieu of flowers the family ask that donations in his memory be given to Our Lady Catholic School Foundation or J.W. and Doris Stine scholarship at McNeese.