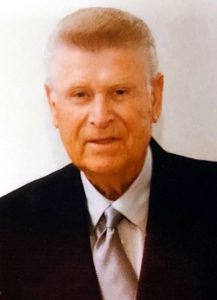 In July 1970, he became a follower of Jesus Christ and now he has received his eternal reward, “WELL DONE, MY GOOD AND FAITHFUL SERVANT.” He was the son of Cullen and Wilma Vetter and brother to John O. Vetter He was the faithful husband to his wife Gloria Vegas Vetter for 59 years. Father to Brian (Robin), Gary (Linda), Lisa (John), Karen (Clayton) and Michelle (Mark). Grandfather to Michael, Jennifer, Megan, Mandi, Jessica, Bobby, Johnny, Clay, Justin, Brooke, Brittany and Brennan. Great Grandfather to Peyton, Sydney, Skylar, Brandt, Braxton, Mattie, Anders, Juliet, Belle, Brer, Beau, and Alexia.

Bob, a member of the famed 1945 Holy Cross Football team, joined the Marine Corps and after being wounded in action on April 23, 1951, he received the Purple Heart for his service in the Korean War. He was known by many as a successful business leader and owner of Vetter Lumber Co. He was also an ordained minister.

It is here where his legacy will live on from his passion for sharing the gospel and leading countless people to Christ. From 1970-1991 He was a very influential speaker and teacher in the Catholic Charismatic Renewal. He was also a member of Word of Faith, then interim pastor of Long Beach Community Church, then associate pastor of Poydras Baptist Church. In his later years, his message was “The Best is Yet to Come”.

A private funeral service will be held in his honor. He will be laid to rest in St. Bernard Memorial Gardens.