Canadian Pacific Railway Limited (“CP”) and Kansas City Southern (“KCS”) announced they have entered into a merger agreement, under which CP has agreed to acquire KCS in a stock and cash transaction representing an enterprise value of approximately USD$29 billion(1), which includes the assumption of $3.8 billion of outstanding KCS debt. The transaction, which has the unanimous support of both boards of directors, values KCS at $275 per share, representing a 23% premium(2), based on the CP and KCS closing prices on March 19, 2021 (and $270 per share, representing a 26% premium(3), based on the respective CP and KCS 30-day volume weighted average prices (“VWAP”)). 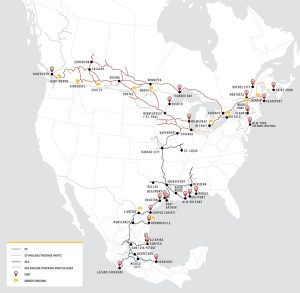 Following the closing into a voting trust, common shareholders of KCS will receive 0.489 of a CP share and $90 in cash for each KCS common share held.

Following final approval from the Surface Transportation Board (“STB”), the transaction will combine the two railroads to create the first rail network connecting the U.S., Mexico, and Canada. Joining seamlessly in Kansas City, Mo., in America’s heartland, CP and KCS together will connect customers via single-network transportation offerings between points on CP’s system throughout Canada, the U.S. Midwest, and the U.S. Northeast and points on KCS’ system throughout Mexico and the South Central U.S.

While remaining the smallest of six U.S. Class 1 railroads by revenue, the combined company will be a much larger and more competitive network, operating approximately 20,000 miles of rail, employing close to 20,000 people and generating total revenues of approximately $8.7 billion based on 2020 actual revenues.

“This transaction will be transformative for North America, providing significant positive impacts for our respective employees, customers, communities, and shareholders,” said CP President and Chief Executive Officer Keith Creel. “This will create the first U.S.-Mexico-Canada railroad, bringing together two railroads that have been keenly focused on providing quality service to their customers to unlock the full potential of their networks. CP and KCS have been the two best performing Class 1 railroads for the past three years on a revenue growth basis.”

“The new competition we will inject into the North American transportation market cannot happen soon enough, as the new USMCA Trade Agreement among these three countries makes the efficient integration of the continent’s supply chains more important than ever before. Over the coming months, we look forward to speaking with customers of all sizes, and communities across the combined network, to outline the compelling case for this combination and reinforce our steadfast commitment to service and safety as we bring these two iconic companies together,” said Mr. Creel.

“KCS has long prided itself in being the most customer-friendly transportation provider in North America,” said KCS President and Chief Executive Officer Patrick J. Ottensmeyer. “In combining with CP, customers will have access to new, single-line transportation services that will provide them with the best value for their transportation dollar and a strong competitive alternative to the larger Class 1s. Our companies’ cultures are aligned and rooted in the highest safety, service and performance standards.”

“Importantly, KCS employees will benefit from being part of a truly North American continental enterprise, which creates a strong platform for revenue growth, capital investment, and future job creation. Customers, labor partners, and shareholders will all benefit from the inherent strengths of this combination, including attractive synergies and complementary routes,” said Mr. Ottensmeyer.

Mr. Creel and Mr. Ottensmeyer concluded, “We have been champions for the environment recognizing the important role rail plays in lowering overall transportation emissions. This combination advances our shared science-based pledges in-line with the Paris Agreement to improve fuel efficiency and lower emissions in support of a more sustainable North American supply chain.”

Transaction to Expand Options and Efficiencies for Customers

The combination will provide an enhanced competitive alternative to existing rail service providers and is expected to result in improved service to customers of all sizes. Grain, automotive, auto-parts, energy, intermodal, and other shippers, will benefit from the increased efficiency and simplicity of the combined network, which is expected to spur greater rail-to-rail competition and support customers in growing their rail volumes.

Importantly, no customer will experience a reduction in independent railroad choices as a result of the transaction. Additionally, with both companies’ focus on safety and track records of operational excellence, customers will benefit from a seamless integration of the two systems without service disruption.

CP and KCS interchange and operate an existing shared facility in Kansas City, Mo., which is the one point where they connect. This transaction will alleviate the need for a time consuming and expensive interchange, improving efficiency and reducing transit times and costs. The combination also will allow some traffic between KCS-served points and the Upper Midwest and Western Canada to bypass Chicago via the CP route through Iowa. This will improve service and has the potential to contribute to the reduction of rail traffic, fuel burn, and emissions in Chicago, an important hub city.

In addition to providing new competition against other railroads, the new single-line routes made possible by the transaction are expected to shift trucks off crowded U.S. highways, yielding reduced highway traffic, lower emissions, and less need for public investments in road and highway bridge repairs. In the Dallas to Chicago corridor alone, the synergies created by this combination are expected to result in meaningful reduction in truck traffic on publicly funded highways.

CP and KCS operational expertise and track records as PSR railroads, coupled with the hand-in-glove fit of the two networks, will help ensure a smooth, safe and efficient combination of the two railroads. In combination with KCS, CP will continue to build on its record as North America’s safest Class 1 railroad for 15 consecutive years based on Federal Railroad Administration-reportable train accident frequency.

By accelerating the combined growth strategies of the two fastest-growing Class 1s with new efficiencies for customers and improved on-time performance under their respective PSR programs, the combined company under CP’s control is expected to create annualized synergies of approximately $780 million over three years.

The combination is expected to be accretive to CP’s adjusted diluted EPS(6) in the first full year following CP’s acquisition of control of KCS, and is expected to generate double-digit accretion upon the full realization of synergies thereafter.

Pro forma for the transaction, CP estimates its leverage ratio against 2021E street consensus EBITDA to be approximately 4.0x with the assumption of KCS debt and issuance of new acquisition-related debt. In order to manage this leverage effectively, CP will be temporarily suspending its normal course issuer bid program, and expects to produce approximately $7 billion of levered free cash flow (after interest and taxes) over the next three years. CP estimates its long-term leverage target of approximately 2.5x to be achieved within 36 months after closing into trust. The combined company will remain committed to maintaining strong investment grade credit ratings while continuing to return capital for the benefit of shareholders.

CP’s ultimate acquisition of control of KCS’ U.S. railways is subject to the approval of the U.S. Surface Transportation Board (“STB”).

First, CP will establish a “plain vanilla”, independent voting trust to acquire the shares of KCS. Upon shareholder approval of the transaction, and satisfaction of customary closing conditions, CP will acquire KCS shares and place them into the voting trust. This step is currently expected to be completed in the second half of 2021, at which point KCS shareholders will receive their consideration.

CP’s placement of KCS shares into the voting trust will insulate KCS from control by CP until the STB authorizes control. KCS’ management and Board of Directors will continue to steward the company while it is in trust, pursuing KCS’ independent business plan and growth strategies.

The second step of the process is to obtain control approval from the STB and other applicable regulatory authorities. The STB review is expected to be completed by the middle of 2022. Upon obtaining control approval, the two companies will be integrated, unlocking the benefits of the combination.

Board, Management, and Headquarters

Following STB approval of the transaction, CP will acquire control of KCS and Mr. Creel will serve as the Chief Executive Officer of the combined company. The combined entity will be named Canadian Pacific Kansas City (“CPKC”).

Four KCS Directors will join CP’s expanded Board at the appropriate time, bringing their experience and expertise in overseeing KCS’ multinational operations.

Additional information on the transaction and the benefits it is expected to bring to the full range of stakeholders will be online at www.FutureForFreight.com. This website will be updated over the coming months with new information.

Canadian Pacific is a transcontinental railway in Canada and the United States with direct links to major ports on the west and east coasts. CP provides North American customers a competitive rail service with access to key markets in every corner of the globe. CP is growing with its customers, offering a suite of freight transportation services, logistics solutions and supply chain expertise. Visit cpr.ca to see the rail advantages of CP. CP-IR

Headquartered in Kansas City, Mo., Kansas City Southern (KCS) (NYSE: KSU) is a transportation holding company that has railroad investments in the U.S., Mexico and Panama. Its primary U.S. holding is The Kansas City Southern Railway Company, serving the central and south central U.S. Its international holdings include Kansas City Southern de Mexico, S.A. de C.V., serving northeastern and central Mexico and the port cities of Lázaro Cárdenas, Tampico and Veracruz, and a 50 percent interest in Panama Canal Railway Company, providing ocean-to-ocean freight and passenger service along the Panama Canal. KCS’ North American rail holdings and strategic alliances are primary components of a railway network, linking the commercial and industrial centers of the U.S., Mexico and Canada. More information about KCS can be found at www.kcsouthern.com.