Pending home sales took a step backward in April, according to the National Association of Realtors®. All four U.S. regions recorded year-over-year increases, but only the Midwest witnessed month-over-month gains in terms of pending home sales contract transactions.

– Pending home sales decreased 4.4% in April from the prior month, in part due to record-low inventory of homes for sale in the first quarter of 2021.

– Pending sales dropped month-over-month in all U.S. regions except the Midwest.

– Year-over-year, however, pending home sales are up double digits in all regions. 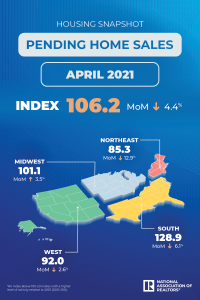 The Pending Home Sales Index (“PHSI”),* www.nar.realtor/pending-home-sales, a forward-looking indicator of home sales based on contract signings, fell 4.4% to 106.2 in April. Year-over-year, signings jumped 51.7% as last year’s pandemic-related shutdowns slumped sales to an all-time low. An index of 100 is equal to the level of contract activity in 2001.

“Contract signings are approaching pre-pandemic levels after the big surge due to the lack of sufficient supply of affordable homes,” said Lawrence Yun, NAR’s chief economist. “The upper-end market is still moving sharply as inventory is more plentiful there.”

Yun anticipates housing supply to improve as a whole as soon as autumn. He points to an increase in the comfortability of those listing, as well as a rise in sellers after the conclusion of the eviction moratorium or as they exit forbearance.

Realtor.com®’s Hottest Housing Markets(link is external) data revealed that out of the largest 40 metros, the most improved metros over the past year, as of May 13, were Detroit-Warren-Dearborn, Mich.; Tampa-St. Petersburg-Clearwater, Fla.; Austin-Round Rock, Texas; Jacksonville, Fla.; and Riverside-San Bernardino-Ontario, Calif.

“The Midwest region, which has the most affordable homes, was the only region to notch a gain in the latest month,” Yun noted. “Some buyers from the expensive cities in the West and Northeast, who have the flexibility to move and work from anywhere, could be opting for a larger-sized home at a lower price in the Midwest.”

*The Pending Home Sales Index is a leading indicator for the housing sector, based on pending sales of existing homes. A sale is listed as pending when the contract has been signed but the transaction has not closed, though the sale usually is finalized within one or two months of signing. Pending contracts are good early indicators of upcoming sales closings. However, the amount of time between pending contracts and completed sales are not identical for all home sales. Variations in the length of the process from pending contract to closed sale can be caused by issues such as buyer difficulties with obtaining mortgage financing, home inspection problems, or appraisal issues. The index is based on a large national sample, typically representing about 20% of transactions for existing-home sales. In developing the model for the index, it was demonstrated that the level of monthly sales-contract activity parallels the level of closed existing-home sales in the following two months. An index of 100 is equal to the average level of contract activity during 2001, which was the first year to be examined. By coincidence, the volume of existing-home sales in 2001 fell within the range of 5.0 to 5.5 million, which is considered normal for the current U.S. population. NOTE: Existing-Home Sales for May will be reported June. The next Pending Home Sales Index will be June 30; all release times are 10:00 a.m. ET.