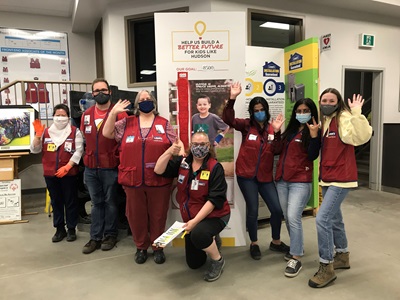 Lowe’s Canada, one of Canada’s leading home improvement retailers operating or servicing some 470 corporate and affiliated stores under different banners, is proud to present more than $1.2 million to Children’s Miracle Network and Opération Enfant Soleil to support the work of 14 children’s hospitals across the country for the fourth consecutive year. To raise this record amount, teams from Lowe’s, RONA, and Reno-Depot corporate and participating affiliated stores collected donations at checkout or sold tickets during the spring. Customers also had the possibility to contribute to the campaign on the banners’ websites, and Lowe’s Canada added to the amount raised with a corporate donation.

“At Lowe’s Canada, our teams are committed to making a difference in their communities and, for this reason, actively engage each year in our campaign benefitting Children’s Miracle Network and Opération Enfant Soleil,’’ says Jean-Sébastien Lamoureux, Senior Vice-President, Public Affairs, Asset Protection and Sustainable Development at Lowe’s Canada. “At a time when it is more important than ever to support the country’s healthcare system, our teams doubled their creativity during the last weeks in order to maximize collected sums. Thanks to their efforts and the generosity of our customers, we have run our best campaign yet.”

Since 2018, Lowe’s Canada has presented more than $3.3 million to the two organizations through its annual fundraising campaigns and corporate donations. All funds raised are given directly to children’s hospitals in the province they were collected.

The in-store and online campaign from March 29 to May 16, together with the corporate donation, enabled Lowe’s Canada to present $700,000 to Opération Enfant Soleil at their telethon on May 30, and some $583,000 to Children’s Miracle Network. “Our campaign was initially supposed to run until May 2, but we decided to extend it both in Ontario and online to maximize the potential for donations. We also added a corporate donation to offset the impacts of the restrictions imposed by public health authorities limiting our stores’ operations in this province,’’ says Mr. Lamoureux.

In Quebec, participating RONA and Reno-Depot stores offered tickets for a chance to win the Maison Enfant Soleil signée Bonneville, for which Lowe’s Canada is the official supplier of building materials. This year, 18 suppliers joined in the organization’s efforts to further lower the cost of construction of the house by donating products, thereby maximizing the money going to children’s hospitals for each ticket sold.

For more information on Lowe’s Canada major philanthropic campaigns, including this one, visit https://www.lowescanada.ca/en/corporate-responsibility/communities.

A great unifier of Quebecers around the cause of sick children, Opération Enfant Soleil supports their healing across the province, regardless of their illness. From raising awareness to prevention, including investigations, diagnosis, the equipment used during treatments, and outpatient care at home, Opération Enfant Soleil supports children and their families through all the steps. Thanks to the amounts raised, around a hundred projects take shape each year in regional hospitals, where children can be treated near their families, as well as in major paediatric centres, which can outfit themselves with cutting-edge technologies and create welcoming spaces. To date, more than $273 million has been awarded across Quebec thanks to the generosity of our donors, the support of our volunteers, and the dedication of our partners. To learn more, visit www.operationenfantsoleil.ca/en/.

Children’s Miracle Network® raises funds and awareness for 170 member hospitals, 14 of which are in Canada. Donations stay local to fund critical treatments and healthcare services, purchase pediatric medical equipment, and support research. Its various fundraising partners and programs support our mission to save and improve the lives of as many children as possible. Visit our website to learn more about our cause. In Canada, Children’s Miracle Network is managed and operated by Canada’s Children’s Hospital Foundations®. www.childrensmiraclenetwork.ca

Lowe’s Companies, Inc. (NYSE: LOW) is a FORTUNE® 50 home improvement company serving approximately 20 million customers a week in the United States and Canada. With fiscal year 2020 sales of $89.6 billion, Lowe’s and its related businesses operate or service more than 2,200 home improvement and hardware stores and employ over 300,000 associates. Based in Boucherville, Quebec, Lowe’s Canadian business, together with its wholly owned subsidiary RONA inc., operates or services some 470 corporate and independent affiliate dealer stores in a number of complementary formats under different banners, which include Lowe’s, RONA, Reno-Depot, and Dick’s Lumber. In Canada, they have more than 26,000 associates, in addition to approximately 5,000 employees in the stores of independent affiliate dealers operating under the RONA banner. For more information, visit lowescanada.ca.