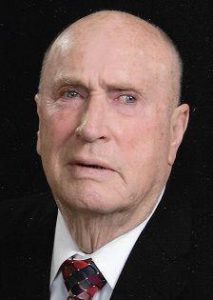 Just as he dealt with all experiences in life, Gus managed his illness with strength and grace, and wanted to spend as much time with his loved ones as possible. On his final days, he was at home surrounded by his family.

Gus was born on Dec. 12, 1938, to Ira Parker Newton and Eleanor Johnson Newton on their family farm near Millen, Ga. After graduating from Wadley High School in 1956, he attended North Georgia College. After studying for two years at the military college, he went on to study forestry at the University of Georgia. Soon after graduation, Gus began his lifelong career as a hardwood lumber salesman.

While at the University of Georgia, the lovely Miriam Whaley caught Gus’s eye. After a whirlwind romance, Gus and Miriam married in 1960. Both Gus and Miriam had always wanted children and decided to start their family. Gus’s proudest accomplishment was becoming a father. He considered himself extremely lucky to have had three daughters. His girls, Nancy, Susan and Ann, called their dad a superhero. As adults, they all still see him that way. He taught them to enjoy every moment life has to offer regardless of its ups and downs.

Gus loved the water. He spent much of his youth at St. Simons Island where his love of the ocean and fishing began. In later years, he would take his family and friends on many “Newton Family Adventures” that involved the salty water.

His career as a lumber salesman led the family to Statesville, where he was involved with the Statesville Jaycees and where many lifelong friendships were made. After moving to Wilkesboro, Gus became a member of the North Wilkesboro Rotary Club. Through his work with the Rotary Club, he was able to raise funds for a project that was near and dear to his heart. His efforts raised the funds to rebuild a playground at an orphanage in St. Petersburg, Russia, that was destroyed by fire.

Gus was quite the storyteller who loved to share the tales of his life with his children, grandchildren or anybody that would listen. Stories of his youthful antics were numerous and kept listeners laughing for hours. We will forever miss his stories and the sound of his laughter. Gus, also known as Daddy, Pop, A.L., Papa, G.G., Grandpa and Uncle, was a man of character and friend to all who met him. To know him was to love him.

A memorial service will be held at Rumple Memorial Presbyterian Church in Blowing Rock at a later date.

In lieu of flowers, memorials can be made to Rumple Memorial Presbyterian Church in Blowing Rock or to Medi Home Health & Hospice in Boone. Online condolences may be shared with the Newton family at the website www.austinandbarnesfuneralhome.com. Austin & Barnes Funeral Home and Crematory is serving the Newton family.