-Existing-home sales rose 1.4% on a seasonally adjusted annual rate from May to June, with no region showing a sales decline.

-The inventory of unsold homes increased 3.3% to 1.25 million from May to June – equivalent to 2.6 months of the monthly sales pace.

-The median existing-home sales price rose at a year-over-year pace of 23.4%, the second highest level recorded since January 1999. Homes on the market typically sold in 17 days. 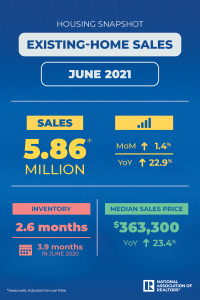 Total existing-home sales,1 https://www.nar.realtor/existing-home-sales, completed transactions that include single-family homes, townhomes, condominiums and co-ops, grew 1.4% from May to a seasonally adjusted annual rate of 5.86 million in June. Sales climbed year-over-year, up 22.9% from a year ago (4.77 million in June 2020).

“Supply has modestly improved in recent months due to more housing starts and existing homeowners listing their homes, all of which has resulted in an uptick in sales,” said Lawrence Yun, NAR’s chief economist. “Home sales continue to run at a pace above the rate seen before the pandemic.”

“At a broad level, home prices are in no danger of a decline due to tight inventory conditions, but I do expect prices to appreciate at a slower pace by the end of the year,” Yun said. “Ideally, the costs for a home would rise roughly in line with income growth, which is likely to happen in 2022 as more listings and new construction become available.”

Distressed sales5 – foreclosures and short sales – represented less than 1% of sales in June, equal to May’s percentage but down from 3% in June 2020.

“Huge wealth gains from both housing equity and the stock market have nudged up all-cash transactions, but first-time buyers who need mortgage financing are being uniquely challenged with record-high home prices and low inventory,” Yun explained. “Although rates are favorably low, these hurdles have been overwhelming to some potential buyers.”

“NAR continues our conversations with policymakers and leaders from across the industry in an effort to boost housing inventory and increase access to safe, affordable housing for all Americans,” said NAR President Charlie Oppler, a Realtor® from Franklin Lakes, N.J., and the CEO of Prominent Properties Sotheby’s International Realty. “As the nation’s economy continues to recover from COVID-19, securing policies that are in the best interest of U.S. consumers and homeowners remains NAR’s priority.”

NOTE: NAR’s Pending Home Sales Index for June is scheduled for release on July 29, and Existing-Home Sales for July will be released August 23; release times are 10:00 a.m. ET.