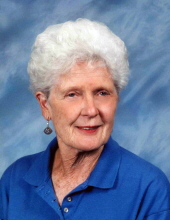 Jean Simkins grew up in Miles City, Montana, the second of four children of George Thomas Williams and Olive Gilmore Williams. Jean graduated from Custer County High School in Miles City in 1940 and started college at Montana State University, where she joined the Pi Phi sorority. She met her future husband, Bob Simkins, at a Greek Mixer as he was a member of the SAEs. After the U.S. joined WWII and women were called upon to join the workforce, Jean dropped out of school to work in Arizona and Helena, while Bob was serving overseas.

Bob and Jean were married in Holy Rosary church in Bozeman on August 11, 1945 while Bob was home on leave. Fortunately for them, war events at that time meant he was released from the army without serving again. Bob had saved up his army pay and used the funds to start a lumberyard in West Yellowstone with Jean and his father, Glen. Jean kept house and worked in the lumberyard, until the winter of ‘47-‘48 when she went to Miles City to await the birth of her first child, Thomas Robert, as there were no medical facilities in West Yellowstone at the time. Tom was his mother’s birthday present in 1948!

In 1950 they added the old GTA lumberyard on N. Wallace in Bozeman to their holdings. Bob’s parents went to West for a couple of summers to run the yard there, while Bob and Jean stayed in Bozeman. After a few years, they sold the lumberyard in West Yellowstone and concentrated on Simkins-Hallin Lumber in Bozeman. They had three more children (William Glen, Janet Theresa, and John Michael), and thrived in the business as well as socially. In Bozeman Jean joined the United Methodist Church in which she remained active until her early nineties. Throughout her life she enjoyed her involvement with a variety of bible studies. For many years she relished her daily involvement in the office at the lumberyard as well as her role as an apartment manager for properties she and Bob purchased together.

Jean was an active volunteer in many organizations, including the Red Cross, Meals on Wheels, and CAP program, among others. She took great pride in being a member of the PEO organization, Chapter AG. She was active: skiing, playing golf, hiking and water aerobics, playing bridge into her 80s & 90s, and many other hobbies. Travel was important to her; she and Bob took several ski trips to Europe, and later traveled around the world. After Bob’s death in 1993 (on their 48th anniversary!) she continued to travel often, with friends and/or family, through the senior center trips.

She especially enjoyed her role as matriarch of a large family. Her support was invaluable to her sister when she moved to Bozeman as a widow, and her nieces, nephews, and grandkids have fond memories of Jean’s house as the focal point for many family celebrations and activities.

She spent the last years of her life with many of her friends at Hillcrest, where she and the family appreciated the great care she received.

A Memorial Service will be held at 4:00 P.M. on Wednesday, August 18 at Bozeman United Methodist Church.

In lieu of flowers, the family prefers donations to be made in Jean’s honor to one of her favorite organizations, The Red Cross, or the charity of your choice.

Arrangements are in the care of Dokken-Nelson Funeral Service.