The total value of building permits in Canada decreased 3.9% to $9.9 billion in July. All provinces except British Columbia and Newfoundland and Labrador posted lower values, with the majority of the national decline reported in Alberta (-23.4%). Building permits fell 3.1% in the residential sector and 5.6% in the non-residential sector. 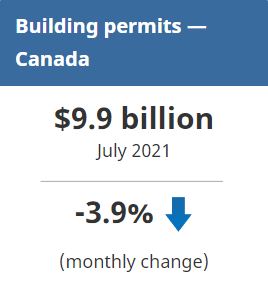 Single-family permits fell 9.6% in July, with two provinces showing growth. Ontario (-9.1%) contributed the most to the decrease.

Construction intentions for multi-family units rose 2.7% in July. British Columbia posted an increase of 55.1%, which was driven by high-valued condo projects in the city of Surrey. In contrast, Ontario reversed strong growth in June (+67.6%) and fell 11.7% in July due to fewer high-valued condo permits reported for the census metropolitan areas (“CMA”) of Hamilton and Guelph.

Non-residential permits down in July

Non-residential permit values declined 5.6% to $2.9 billion in July, despite Ontario’s strong growth of 17.3%. Seven provinces were down, with Alberta reporting the largest decrease (-46.9%).

Institutional permits decreased for a third consecutive month to $718 million, with eight provinces reporting lower values. The majority of the decline stemmed from Quebec (-36.8%), following a strong June (+40.0%) when multiple high-valued permits were issued for alternative care and senior homes. Conversely, Ontario saw a 60.0% increase, with projects such as the Linhaven nursing home and a new secondary school both in the CMA of St. Catharines–Niagara.

Alberta’s commercial permits fell 45.5% in July, following a notable increase in June (+56.6%). The decline in Alberta and in six other provinces pulled the value of commercial permits at the national level down 6.9% to $1.6 billion.

The value of industrial permits was up 17.6% to $612 million, with half the provinces reporting growth. Quebec (+59.5%) led the increase, with a $30 million warehouse permit, and was followed by Nova Scotia (+412.3%), where a $40 million composting facility permit was issued.

Statistics Canada has a Housing Market Indicators dashboard. This web application provides access to key housing market indicators for Canada, by province and by census metropolitan area. These indicators are updated automatically with new information from monthly releases, giving users access to the latest data.

Starting with the March 2021 reference period, monthly constant dollar estimates are available for the entire data series (34-10-0066-01). Constant dollars remove the effects of price changes over time and are calculated using quarterly deflators from the Building Construction Price Index (18-10-0135-01). Typically, the first two months of a quarter use the previous quarter’s price level and are revised when the new quarterly price index becomes available.

Industrial buildings: Buildings used in the processing or production of goods, or related to transportation and communication.

Commercial buildings: Buildings used in the trade or distribution of goods and services.

Institutional and government buildings: Buildings used to house public and semi-public services, such as those related to health and welfare, education, or public administration, as well as buildings used for religious services.

Data on building permits for August will be released on October 4, 2021.