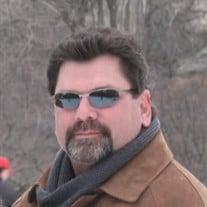 Rusty was a staple in the community and loved by so many. Like one of his good friends Jim described, he would immediately become a friend to anyone that he would meet. He grew in our hearts and was the person that you always wanted to sit by at an event or when you were together. Never short of an opinion or a laugh, he would always brighten the lives of those that were with him. Rusty was someone that you could always call, and he would be there for you. He cared for others, more than he cared for himself.

He was a diehard fan of the Florida State Seminoles and Alabama Crimson Tide football. As an alum of Vanguard High School class of 1978, he was still actively involved with the football team. Over the years, he and his brother, Larry would coach younger kids in the Marion County Youth Football League, so they would go on and play at Vanguard. For many years later, both would continue to support Vanguard with their time and contributions, running the annual golf tournament and doing whatever support they could for the team.

One of his favorite hobbies was hunting. He loved when fall rolled around because it meant he could enjoy time at Hidden Creek plantation near Greenville, Alabama with his brother and hunting buddies. It helped him regroup and become one with nature. He also enjoyed evenings out on his back deck, listening to music, drinking a nice glass of whiskey and smoking a cigar while watching his dogs Maddie and Mia play in the yard.

He worked for the family business, Fuqua Sawmill for 40+ years and was proud of his family name. It showed in his dedication to the Mill.

Rusty became a grandfather a little less than 3 years ago to Ava who he called AJ or his “Peanut”. He was head over heels for her. She was the apple of his eye and he truly enjoyed that new role of being a doting grandparent.

Rusty is survived by his children Jessica and Son-in-law John, Amanda and Brandon, granddaughter Ava, Siblings Larry and Sister-in-law Mary, Jay, Torin and Debbie, and nieces Kelli and Taylor. He is preceded in death by his mother Ruth, Step-Father Charlie, and Father Bill.

Funeral service will be held at 606 SW 2nd Avenue Ocala, FL 34471 at Roberts of Ocala downtown on September 9th, 2021. There will be a viewing from 12-2pm, and the service to follow. There will also be a live streaming of the service online for those who cannot make it in person.

In lieu of flowers, please make a donation to Vanguard Touchdown Club in his honor.