Existing-home sales retreated in August, breaking two straight months of increases, according to the National Association of Realtors®. Each of the four major U.S. regions experienced declines on both a month-over-month and a year-over-year perspective.

Total existing-home sales,1 https://www.nar.realtor/existing-home-sales, completed transactions that include single-family homes, townhomes, condominiums and co-ops, fell 2.0% from July to a seasonally adjusted annual rate of 5.88 million in August. Year-over-year, sales dropped 1.5% from a year ago (5.97 million in August 2020). 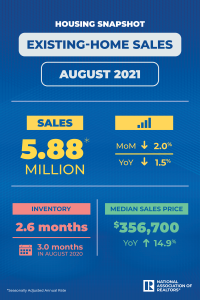 “Sales slipped a bit in August as prices rose nationwide,” said Lawrence Yun, NAR’s chief economist. “Although there was a decline in home purchases, potential buyers are out and about searching, but much more measured about their financial limits, and simply waiting for more inventory.”

Total housing inventory2 at the end of August totaled 1.29 million units, down 1.5% from July’s supply and down 13.4% from one year ago (1.49 million). Unsold inventory sits at a 2.6-month supply at the current sales pace, unchanged from July but down from 3.0 months in August 2020.

“Securing a home is still a major challenge for many prospective buyers,” said Yun. “A number of potential buyers have merely paused their search, but their desire and need for a home remain.”

Moreover, a recent study from NAR found that student loan debt is preventing the majority of non-owner millennials and those making over $100,000 from buying a home.

Distressed sales5 – foreclosures and short sales – represented less than 1% of sales in August, equal to the percentage seen a month prior and equal to August 2020.

NOTE: NAR’s Pending Home Sales Index for August is scheduled for release on September 29, and Existing-Home Sales for September will be released October 21; release times are 10:00 a.m. ET.

4 Survey results represent owner-occupants and differ from separately reported monthly findings from NAR’s REALTORS® Confidence Index, which include all types of buyers. Investors are under-represented in the annual study because survey questionnaires are mailed to the addresses of the property purchased and generally are not returned by absentee owners. Results include both new and existing homes.

5 Distressed sales (foreclosures and short sales), days on market, first-time buyers, all-cash transactions and investors are from a monthly survey for the NAR’s REALTORS® Confidence Index, posted at nar.realtor.