Pending home sales dipped in September, retreating slightly following a previous month of growth, according to the National Association of Realtors®. Each of the four major U.S. regions saw contract activity decline month-over-month and year-over-year, with the Northeast weathering the largest yearly drop. 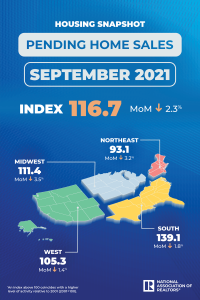 The Pending Home Sales Index (“PHSI”),* www.nar.realtor/pending-home-sales, a forward-looking indicator of home sales based on contract signings, decreased 2.3% to 116.7 in September. Year-over-year, signings decreased 8.0%. An index of 100 is equal to the level of contract activity in 2001.

“Contract transactions slowed a bit in September and are showing signs of a calmer home price trend, as the market is running comfortably ahead of pre-pandemic activity,” said Lawrence Yun, NAR’s chief economist. “It’s worth noting that there will be less inventory until the end of the year compared to the summer months, which happens nearly every year.

“Some potential buyers have momentarily paused their home search with intentions to resume in 2022.”

Although housing supply remains low, Yun says he expects inventory to turn the corner in 2022.

“Rents have been mounting solidly of late, with falling rental vacancy rates,” Yun said. “This could lead to more renters seeking homeownership in order to avoid the rising inflation, so an increase in inventory will be welcomed.”

Realtor.com®’s Hottest Housing Markets(link is external) data revealed that out of the largest 40 metros, the most improved metros over the past year, as of October 21, were Orlando-Kissimmee-Sanford, Fla.; Jacksonville, Fla.; Tampa-St. Petersburg-Clearwater, Fla.; Nashville-Davidson-Murfreesboro-Franklin, Tenn.; and Denver-Aurora-Lakewood, Colo.

NOTE: Existing-Home Sales for October will be reported November 22. The next Pending Home Sales Index will be November 29; all release times are 10:00 a.m. ET.

Source: The National Association of Realtors