Pending home sales increased in October, rebounding after a decline the month prior, according to the National Association of Realtors®. Contract activity rose month-over-month in each of the four major U.S. regions. On a year-over-year basis, however, transactions were split, as two regions reported drops and two others posted gains. 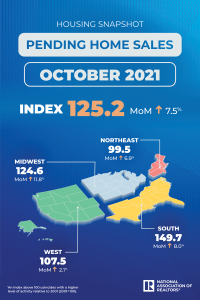 The Pending Home Sales Index (“PHSI”),* www.nar.realtor/pending-home-sales, a forward-looking indicator of home sales based on contract signings, rose 7.5% to 125.2 in October. Year-over-year, signings fell 1.4%. An index of 100 is equal to the level of contract activity in 2001.

“Motivated by fast-rising rents and the anticipated increase in mortgage rates, consumers that are on strong financial footing are signing contracts to purchase a home sooner rather than later,” said Lawrence Yun, NAR’s chief economist. “This solid buying is a testament to demand still being relatively high, as it is occurring during a time when inventory is still markedly low.

“The notable gain in October assures that total existing-home sales in 2021 will exceed 6 million, which will shape up to be the best performance in 15 years.”

While the market is expected to remain robust, Yun forecasts home prices will rise at a gentler pace over the course of the next several months and expects demand to be milder as mortgage rates increase.

Realtor.com®’s Hottest Housing Markets(link is external) data revealed that out of the largest 40 metros, the most improved metros over the past year, as of November 18, were Orlando-Kissimmee-Sanford, Fla.; Jacksonville, Fla.; Tampa-St. Petersburg-Clearwater, Fla.; Dallas-Fort Worth-Arlington, Texas; and Nashville-Davidson, Tenn.

Compared to the previous month, contract signings rose at the strongest pace in the Midwest and South regions. Month-over-month, the Northeast PHSI increased 6.9% to 99.5 in October, a 10% drop from a year ago. In the Midwest, the index climbed 11.8% to 124.6 last month, up 5.1% from October 2020.

NOTE: Existing-Home Sales for November will be reported December 22. The next Pending Home Sales Index will be December 29; all release times are 10:00 a.m. ET.

Source: The National Association of Realtors