Shipping delays continued to be the main word as inventories in the field were waning and deliveries were frustratingly slow. Sawmills were able to keep strong order files of up to 4 weeks so prices remained flat. Lumber yards at suppliers were choked due to sheer lack of rails cars coming in as well as difficulty sourcing trucks.

Much-welcomed stability in pricing arrived for the week ending March 18, 2022, when the price of benchmark softwood lumber item Western Spruce-Pine-Fir 2×4 #2&Btr KD (RL) remained flat compared to the previous week at US$1,400 mfbm, said weekly forest products industry price guide newsletter Madison’s Lumber Reporter. That week’s price is up by +$118, or +9% from one month ago when it was $1,283. 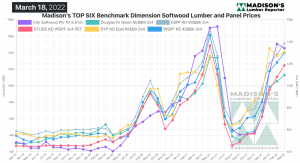 Scads of rail cars all over North America were still waiting to be shipped, augmenting the already-widespread perception of limited material.

“A persistent low-key scramble for limited material underpinned a market that appeared to be softening.”  –  Madison’s Lumber Reporter 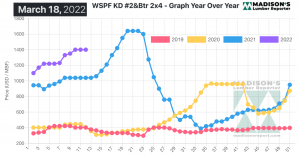 Bewildered buyers of Western S-P-F in the United States wrung their hands with each new transaction, wondering whether they should have waited or bought more. Prices were a stab in the dark, with numbers varying considerably depending on the source and destination. Those who sat on the sidelines also questioned if they were making the right move, as divining the direction of this wacky market was nigh-impossible.

While confusion and uncertainty still reigned in the Western S-P-F market, demand and sales activity were less frenetic. Players noted that, even as the market overall appeared softer, sawmills felt little pressure to slash their asking prices as ongoing logistical issues continued to create a mirage of limited supply. Price spreads between suppliers endured, with numbers varying noticeably between large producers and smaller mills, as well as among wholesalers and distributers.

“STUDS: Demand for Western S-P-F studs was even as upward momentum in pricing tapered off. Prices, on balance, were decidedly flat. Buyers shook their heads as they eyed their waning inventories and continued to wait for wood ordered weeks ago to start rolling. Stud mills maintained early- to mid-April order files as ongoing transportation problems prevented them from clearing their overstuffed yards. ”  –  Madison’s Lumber Reporter