Existing-home sales decreased in March, marking two consecutive months of declines, according to the National Association of Realtors®. Month-over-month, sales in March waned in three of the four major U.S. regions while holding steady in the West. Sales were down across each region year-over-year. 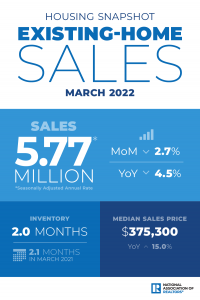 With mortgage rates expected to rise further, Yun predicts transactions to contract by 10% this year, for home prices to readjust, and for gains to grow around 5%.

“Home prices have consistently moved upward as supply remains tight,” Yun said. “However, sellers should not expect the easy-profit gains and should look for multiple offers to fade as demand continues to subside.”

“It appears first-time homebuyers are still looking to lock in at current mortgage rates before they inevitably increase,” Yun said.

“With rising mortgage rates, cash sales made up a larger fraction of transactions, climbing to the highest share since 2014,” Yun said.

Distressed sales5 – foreclosures and short sales – represented less than 1% of sales in March, equal to the percentage seen in both February 2022 and March 2021.

Realtor.com®’s Market Trends Report(link is external) in March shows that the greatest year-over-year median list price growth occurred in Miami (+37.0%), Las Vegas (+35.2%), and Tampa (+32.0%). Austin posted the highest growth in the share of homes which had their prices reduced compared to last year (+2.9 percentage points), followed by Sacramento and Memphis (+2.3 percentage points).

“Finding the right home in this market – from making an offer to eventually buying – is an intense process,” said NAR President Leslie Rouda Smith, a Realtor® from Plano, Texas, and a broker associate at Dave Perry-Miller Real Estate in Dallas. “The current state of housing is indeed one of the most competitive markets that I have witnessed, but with patience and the assistance of a trusted Realtor®, the outcome can be very rewarding.”

Existing-home sales in the South dipped 3.0% in March from the prior month, registering an annual rate of 2,620,000, a decrease of 3.0% from one year ago. The median price in the South was $339,000, a 21.2% surge from one year prior. For the seventh straight month, the South experienced the highest pace of price appreciation in comparison to the other three regions.

NOTE: NAR’s Pending Home Sales Index for March is scheduled for release on April 27, and Existing-Home Sales for March will be released on May 19; release times are 10:00 a.m. ET.

1 Existing-home sales, which include single-family, townhomes, condominiums and co-ops, are based on transaction closings from Multiple Listing Services. Changes in sales trends outside of MLSs are not captured in the monthly series. NAR benchmarks home sales periodically using other sources to assess overall home sales trends, including sales not reported by MLSs. Existing-home sales, based on closings, differ from the U.S. Census Bureau’s series on new single-family home sales, which are based on contracts or the acceptance of a deposit. Because of these differences, it is not uncommon for each series to move in different directions in the same month. In addition, existing-home sales, which account for more than 90% of total home sales, are based on a much larger data sample – about 40% of multiple listing service data each month – and typically are not subject to large prior-month revisions. The annual rate for a particular month represents what the total number of actual sales for a year would be if the relative pace for that month were maintained for 12 consecutive months. Seasonally adjusted annual rates are used in reporting monthly data to factor out seasonal variations in resale activity. For example, home sales volume is normally higher in the summer than in the winter, primarily because of differences in the weather and family buying patterns. However, seasonal factors cannot compensate for abnormal weather patterns. Single-family data collection began monthly in 1968, while condo data collection began quarterly in 1981; the series were combined in 1999 when monthly collection of condo data began. Prior to this period, single-family homes accounted for more than nine out of 10 purchases. Historic comparisons for total home sales prior to 1999 are based on monthly single-family sales, combined with the corresponding quarterly sales rate for condos.