Existing-home sales recorded a third straight month of declines, slipping slightly in April, according to the National Association of Realtors®. Month-over-month sales were split amongst the four major U.S. regions, with two areas posting gains and the other two experiencing waning in April. Year-over-year sales struggled, as each of the four regions reported dips. 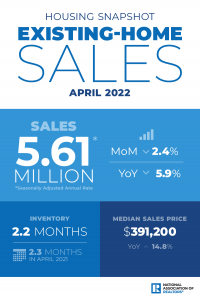 “Higher home prices and sharply higher mortgage rates have reduced buyer activity,” said Lawrence Yun, NAR’s chief economist. “It looks like more declines are imminent in the upcoming months, and we’ll likely return to the pre-pandemic home sales activity after the remarkable surge over the past two years.”

“Housing supply has started to improve, albeit at an extremely sluggish pace,” said Yun.

He also noted the rare state of the current marketplace.

“The market is quite unusual as sales are coming down, but listed homes are still selling swiftly, and home prices are much higher than a year ago,” said Yun.

“Moreover, an increasing number of buyers with short tenure expectations could opt for 5-year adjustable-rate mortgages, thereby assuring fixed payments over five years because of the rate reset,” he added. “The cash buyers, not impacted by mortgage rate changes, remain elevated.”

Individual investors or second-home buyers, who make up many cash sales, purchased 17% of homes in April, down from 18% in March and equal to 17% in April 2021.

Distressed sales5 – foreclosures and short sales – represented less than 1% of sales in April, equal to the percentage seen in March and down from 2% in April 2021.

“As we find ourselves in the midst of a massive housing shortage, NAR continues to work with leaders across the private and public sectors to help close this deficit,” said NAR President Leslie Rouda Smith, a Realtor® from Plano, Texas, and a broker associate at Dave Perry-Miller Real Estate in Dallas. “As the nation’s largest real estate association, we are urging policymakers to enact zoning reforms, homebuilder incentives, and other necessary regulations to help correct this situation.”

Existing-home sales in the South fell 4.6% in April, posting an annual rate of 2,490,000, which represents a decrease of 5.7% from one year ago. The median price in the South was $352,100, a 22.2% climb from one year prior. For the eighth consecutive month, the South recorded the highest pace of price appreciation in comparison to the other three regions. Additionally, the South is the only region to report year-over-year double-digit price gains.

NOTE: NAR’s Pending Home Sales Index for April is scheduled for release on May 26, and Existing-Home Sales for May will be released on June 21; release times are 10:00 a.m. ET.

1 Existing-home sales, which include single-family, townhomes, condominiums and co-ops, are based on transaction closings from Multiple Listing Services. Changes in sales trends outside of MLSs are not captured in the monthly series. NAR benchmarks home sales periodically using other sources to assess overall home sales trends, including sales not reported by MLSs. Existing-home sales, based on closings, differ from the U.S. Census Bureau’s series on new single-family home sales, which are based on contracts or the acceptance of a deposit. Because of these differences, it is not uncommon for each series to move in different directions in the same month. In addition, existing-home sales, which account for more than 90% of total home sales, are based on a much larger data sample – about 40% of multiple listing service data each month – and typically are not subject to large prior-month revisions. The annual rate for a particular month represents what the total number of actual sales for a year would be if the relative pace for that month were maintained for 12 consecutive months. Seasonally adjusted annual rates are used in reporting monthly data to factor out seasonal variations in resale activity. For example, home sales volume is normally higher in the summer than in the winter, primarily because of differences in the weather and family buying patterns. However, seasonal factors cannot compensate for abnormal weather patterns. Single-family data collection began monthly in 1968, while condo data collection began quarterly in 1981; the series were combined in 1999 when monthly collection of condo data began. Prior to this period, single-family homes accounted for more than nine out of 10 purchases. Historic comparisons for total home sales prior to 1999 are based on monthly single-family sales, combined with the corresponding quarterly sales rate for condos.

4 Survey results represent owner-occupants and differ from separately reported monthly findings from NAR’s REALTORS® Confidence Index, which include all types of buyers. Investors are under-represented in the annual study because survey questionnaires are mailed to the addresses of the property purchased and generally are not returned by absentee owners. Results include both new and existing homes.

5 Distressed sales (foreclosures and short sales), days on market, first-time buyers, all-cash transactions and investors are from a monthly survey for the NAR’s REALTORS® Confidence Index, posted at nar.realtor.